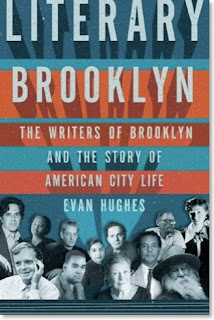 Acclaimed author Evan Hughes' book, "Literary Brooklyn"  has drawn praise and acclaim for its remarkable illumination of the lives of Brooklyn writers and their collective impact on the world of literature.


“Smart… [Hughes] has perceptive things to say about Brooklyn’s tangled relationship to American lit. He traces the way writers have absorbed Brooklyn’s scruffy, somewhat persecuted mindset… Literary Brooklyn is at its best in the details and quotations Mr. Hughes plucks from Brooklyn writers’ lives; his book becomes a pleasure-delivery system.”—The New York Times“

In a way, the literary history of Brooklyn is like a literary history of America itself — not because America is like Brooklyn, which it isn't, but because it is a story of a certain set of writers describing what they knew as America came into being, as the country invented a literature of its own... [Hughes] lays in the facts and brightens them with solid literary critique.”—Los Angeles Times

Acclaimed author, Evan Hughes will discuss his recent book “Literary Brooklyn: The Writers of Brooklyn and the Story of American City Life” and take us into the lives of Norman Mailer, Henry Miller, Richard Wright, Jonathan Lethem, Thomas Wolfe, and other great Brooklyn-based writers.

Author Tim McLoughlin, a fifth-generation Brooklynite and editor of the Brooklyn-Noir series will read from his work and speak about the legacy of Brooklyn-centric literature and the underlying Brooklyn-inspired stories and motifs found in the work of writers past and present.

The second part of the program will be readings of Brooklyn non-fiction stories by several participants of the 2012 Brooklyn Non-Fiction Prize.

“The Burning of Brooklyn” - Daphne Horton

“Flavor on the 5” – Jonathon Segal

The winner of the 2012 Brooklyn Non-Fiction Prize will be announced at this event.

This program is Free. Open to the general public.