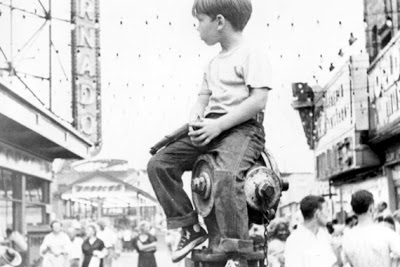 With Richard Brewster, Richie Andrusco (1953) 80min, 35mm "Our New Wave would never have come into being if it hadn't been for the young American Morris Engel, who showed us the way to independent production with his fine movie, Little Fugitive.” —François Truffaut This groundbreaking American independent film, an inspiration to both François Truffaut and John Cassavetes, is a poetic, expressive portrait of childhood shot with non-professional actors on a portable 35mm camera specially built by co-director Engel.

Seven-year-old Joey goes on the lam when his older brother fools him into thinking he’s shot and killed him, escaping to Coney Island and losing himself in a kaleidoscopic world of carousels, clowns, batting cages, hot dogs, and beaches. Flooded with vibrating Coney Island soundscapes, this beautifully shot gem captures Brooklyn’s amusement paradise at the height of its splendor. Brooklyn Brewery will be on hand in the lobby from 6:30 to 9:30pm offering samples of BAMboozle Ale.

Try these 100% bottle re-fermented ales and pepper the brewery rep with questions and compliments. This event is co-presented by the Brooklyn Film & Arts Festival. BAM Rose Cinemas General Admission: $12 BAM Cinema Club Members: $7 Movie Moguls: Free Seniors: $9 Students: $9 (25 and under with a valid ID, Mon—Thu)
Posted by Author at 11:57 AM No comments: